This week we have seen further extreme flooding in Belgium, China, India, Panama and Russia. London is flooding as I write.

The famine in Madagascar has been recognised as the first to be caused solely by global heating. The Greenland ice sheet is on the brink of a major tipping point. Scientists say it is now impossible to stop  melting  which will cause between 1 and 2m of sea level rise. Even if we cut greenhouse gas emissions to zero tomorrow the rest of Greenland is in great danger of continuing to melt, which will cause sea levels to rise by 7m. This would flood most coastal cities and make Doncaster a seaside town.

The Amazon Rainforest is no longer a carbon sink. This means that instead of breathing in the carbon dioxide humans are producing, it is now adding to that pollution because there are so many fires. Fewer trees mean less rain and higher temperatures, making the dry season even worse for the remaining forest.   Luciana Gatti, at the National Institute for Space Research in Brazil explains, “We have a very negative loop that makes the forest more susceptible to uncontrolled fires.”

The media have been reporting some of these events but they are still not telling the whole terrible truth about the climate and ecological crisis.

The recent Climate Change Committee report  has been ignored by the media. Published in June this advises the Government about the risks the UK are facing from the changing climate. It details extreme risks we are facing now, not just in the future. These include

*Risks to human health, wellbeing and productivity from increased exposure to heat in homes and other buildings

*Multiple risks to the UK from climate change impacts overseas

So in plain English we should be preparing for widespread power cuts due to extreme weather, food shortages due to harvests around the world being devastated and many deaths due to extreme heat. Some species will go extinct.

*Risks to soil health from increased flooding and drought

*Risks to crops, livestock and commercial trees from multiple hazards

*Risks to supply of food, goods and vital services due to climate-related collapse of supply chains and distribution networks

In other words a hotter climate will make it much harder to grow crops as the soil will deteriorate. Supermarket supply chains could collapse, leaving the shelves empty. Our forests and woods that currently absorb carbon could be subject to wildfires, turning them from carbon sinks to carbon emitters, further increasing climate change. It is hard to imagine how our civilisation would survive these threats.

Extinction Rebellion Sheffield are distributing a tabloid paper called “Not the Sun”. The front page features Rupert Murdoch in front of a burning planet. It accuses him of pumping out propaganda through his global network of newspapers and TV channels to convince us that climate change is fake news. “He’s part of a super rich cabal of newspaper owners including Viscount Rothermere, owner of the Daily Mail, and Frederick Barclay, who owns the Daily Telegraph, who Not the Sun believes want to boost their huge bank balances by stopping urgent action to tackle a global warming meltdown-until it’s too late.”

The media are  not  holding the Government to account when it comes to the climate emergency. They let the Government get away with fooling us. For instance the Government is nowhere near meeting the first major milestone for its net zero target, which is a 68% reduction in emissions by 2030. At best they will miss this target by 25%.  The Government also lies to us about the emissions we add to the atmosphere. They count 451 megatonnes of CO2, but ignore the 347 megatonnes from air travel, shipping, and goods that we import, which make up 43% of our emissions.

Somehow we have to free the press from the control of this super rich elite, so they can tell the truth about the catastrophe we are facing.

In the light of the continued dramatic increase in extreme weather, the continued worldwide increase in CO2 emissions and the failure of the press to report accurately in our newspapers and tv, it is not surprising that climate activists will again be taking to the streets of London in August to demand the politicians ACT NOW to defend us.

Edgar McGregor recently tweeted “I don’t think people understand….climate activists are losing. Despite everything we have done, our civilization is STILL emitting more CO2 than ever before. We are on track for ecological collapse. We need your help. We need you to be a climate activist. Please. Please. 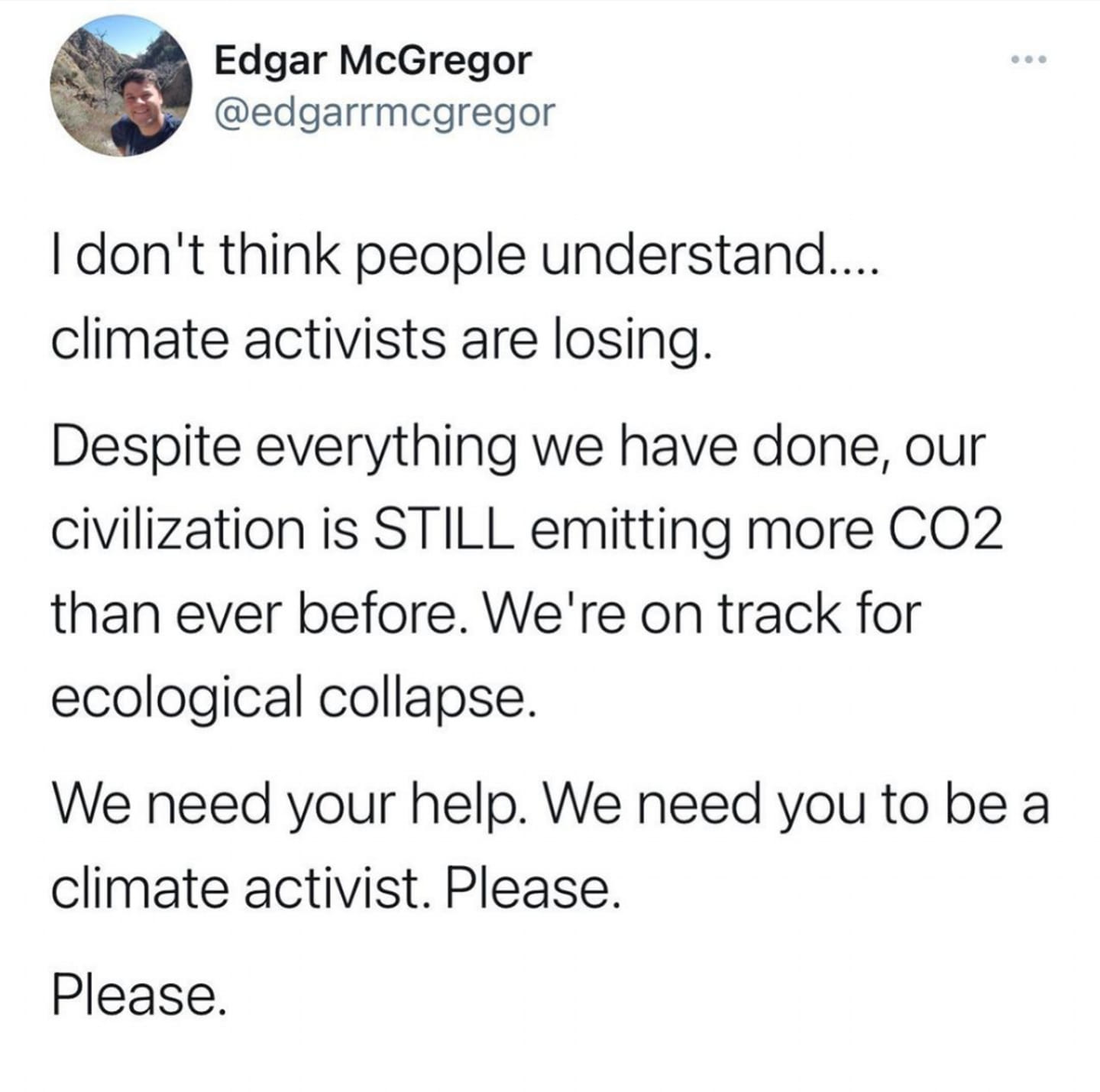