Some fascinating citizen science has developed during the lockdown, in the roads between the Botanical Gardens and Hallam University where I used to study, called the Groves Naturewatch Project. Founded and championed by Lera Miles and botanist Gerry Firkins and helped by many local residents the group are building a database of all the living things they find in the area.

The records are all available on www.inaturalist.org/. An accurate app is used to help identify species along with the expert knowledge within the group, and the scientific community on inaturalist confirm the identification.

Gerry told me “ Since we started in March 2020 we have 344 observations covering 210 species (fauna and flora). 2 types of flatworms are new to Sheffield: and a saxifrage is new to the city area.” Gerry has been surveying the roads for wild or self-seeded plants.  This has turned up 71 species so far with more ground yet to cover.  One of the surprising finds was Rue-leaved Saxifrage.

This is a plant of rocky outcrops more usually seen in Derbyshire.  Checking the distribution around the country it did appear in some cities, but there were no records for Sheffield city at all!    By alerting other botanists it has also been spotted on another road in Sheffield.  Eight plants have been found altogether. Who knew the Groves was such a special place!

I asked Gerry if the Council spraying of Glyphosate is damaging this biodiversity. He said the Council had recently sprayed the gutters in the area but had not sprayed the border of the pavement, where most of the wildflowers grow. I wondered why The Groves are treated differently to my street as the poppies growing on my pavement border were all killed when the Council came to spray.

The particularly interesting, but also worrying find, have been the flatworms. A delivery of compost turned out to contain a tiny Yellow-striped flatworm originating from Australia (see picture).  Another species of  Australian flatworm was later found in the garden.  Both eat other small animals including earthworms.  The Australian flatworm is rare but well known now in the UK, but the Yellow-striped is a newer arrival.  This is the most northerly record as yet and only a handful have been recorded in the UK.  They look somewhat like flattened slugs with no visible head and shelter under rocks. There are 4 native flatworms as well, so not all flatworms are dangerous invaders.

These records have been shared with the Non-native Species Secretariat who monitor new species arriving in the country and their spread.

Our native earthworms are the gardeners best friend. They recycle nutrients, eating dead plants and leaves and turning them into worm castings which contain 5 times more nitrogen, 7 times more phosphorus and a thousand times more beneficial bacteria than the original soil. They also improve the soil structure, leaving space for water to drain and be stored in the soil. Worms even clear up our pollution. They can improve contaminated land by enhancing “bioremediation”. Their wriggling and burrowing movements regulate the distribution of microorganisms in the soil which break down the toxic materials. Worms are also a vital food for many birds, hedgehogs and frogs.

Birds that have been recorded in the Groves so far include Tawny owls,

Siskins,and Chiffchaffs. Though in decline generally across Europe,Chiffchaffs have started to sing again in the Groves this month. 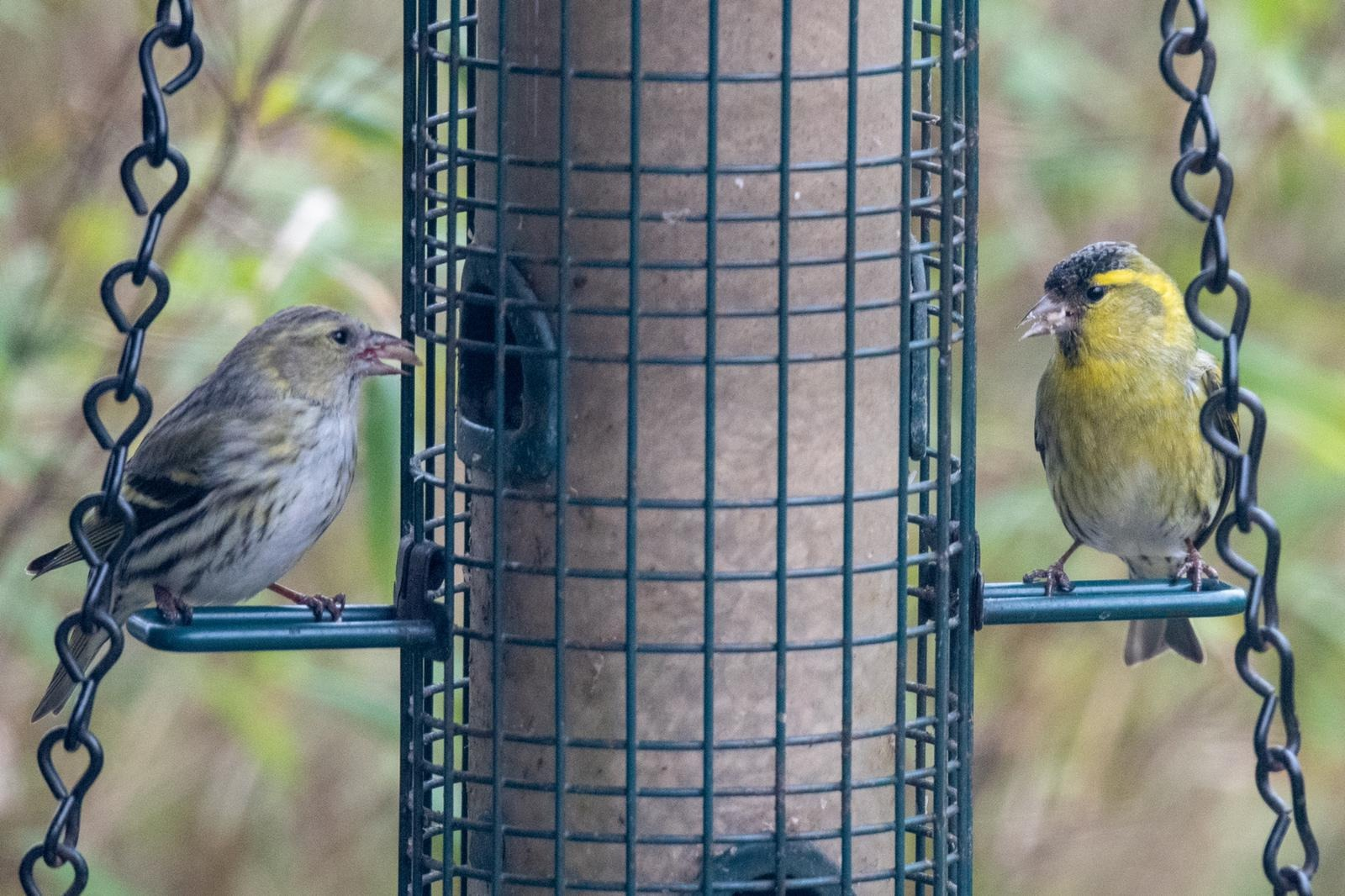 A pair of Siskins

A Greater Spotted Woodpecker has been drumming nearly every day in the mornings for the last 3 weeks. As it is moving from tree to tree to do this, it’s unlikely to be nest building but more likely trying to attract a mate.

The frogs have been to most ponds now and frogspawn is in abundance.  42 adults were seen in one pond.  It was a noisy affair!  Please don’t share frogspawn/tadpoles with other gardens.  There is a virus that is spreading around the UK causing frogs sores and blisters and even death.

Despite being larger as adults, frogspawn and frog tadpoles fall prey to the smooth newt that lives in the Groves. The newts arrive in the ponds at the same time as the frogs, ready for the spawn.  They then breed laying their eggs in the water also. 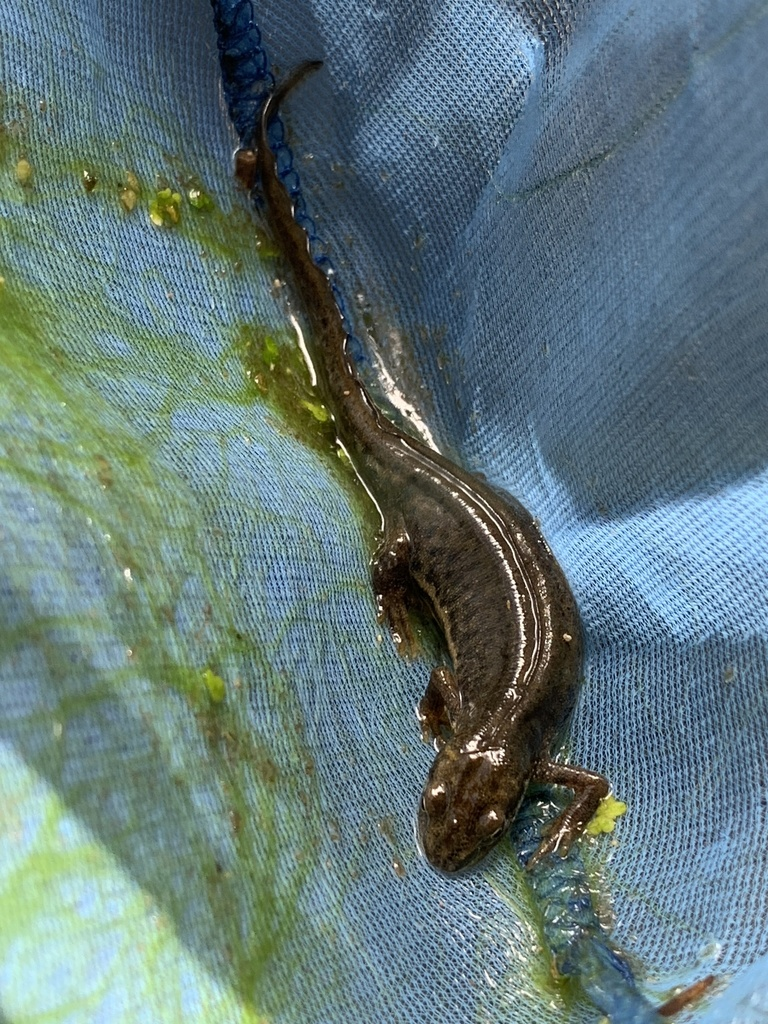 Five other groups are developing in Sheffield including one in Gleadless Valley, the General Cemetery and another specialising in bats.

As our climate is changing it is important that we monitor bio-diversity to identify species that may be declining and indeed invasive species that may have undesirable effects on native creatures. The Groves project is a brilliant resource that will help monitor this, as well as encouraging wildlife gardening to increase biodiversity. To find out more do visit https://www.inaturalist.org/projects/the-groves-sheffield. Maybe you could start a similar project in your area?